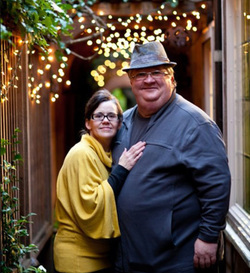 Rev. Mark Morgan is the senior pastor at Abounding Grace of San Francisco, a congregation he founded in December 2004. He is currently pursuing his Masters in Divinity with the Assembly of God seminary to broaden his scholastic and spiritual understanding of Christianity. Rev. Morgan believes his studies will make him a better Christian and improve his ability to lead his family and congregation. When he completes the program, he intends to study for his doctorate in the same field.

Besides leading Abounding Grace of San Francisco, Rev. Mark Morgan serves on the Chinese Summit Committee for the United Pentecostal Church. Rev. Morgan is president and founder of Global Impact Ministries, an organization dedicated to sharing the apostolic faith in North America and overseas.

Rev. Morgan's career began in 1982 when he and his wife Naomi moved to Anna, Illinois to assume the youth of a local United Pentecostal Church. Two years later he embarked on an evangelistic ministry that lasted four years and saw him travel across North America and overseas speaking at apostolic gatherings. In 1988, Rev. Morgan the pastorate of the United Pentecostal Church in Okmulgee, Oklahoma, where he served as senior pastor for 10 years. In 1988, he moved to California where he re-embarked on an evangelistic crusade and traveled extensively speaking at camps, conferences, crusades and ministerial training venues.

Rev. Morgan remains a well-respected and sought after evangelist and teacher. He resides in the San Francisco Bay Area with his wife, children and grandchildren.